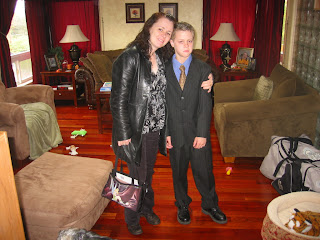 Well, Jock made the PeeWee AA hockey team!! That means much more ice time than previous years. Which is good. He is determined that he will make the NHL one day, so the more ice time for him, the better. We had four games this weekend and will have four more next weekend. Was pretty hectic this weekend, especially since Clown and Princess are coming down with something. 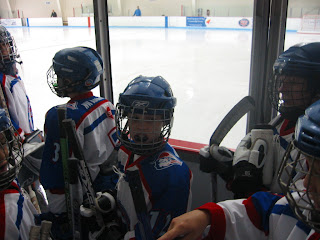 Yesterday I took him to his last game so that Stud could stay home and spend time with the younger two and give Cryptic some free time so that he didn't have to always babysit. We were running a little late and Jock was none too pleased that I had Stud take a photo of us. Jock looked SO GREAT in his suit, I needed a shot of him. 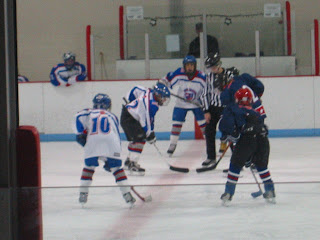 He is # 12 in the white. His position is center, if anyone knows anything about hockey. He is upset at me, because I still don't understand the game. He chided me because this is the start of his fifth season and I still don't get it. I missed so much the season of '05-'06 because I was in a funk from my brother dying and all. I still have not caught up. Many of the people in the association had never even seen me and I am sure they must have wondered if Stud was a single father or something. 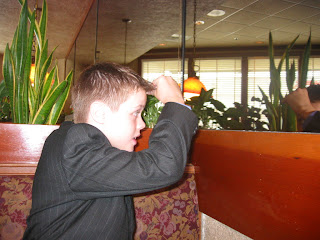 After the game we were starved and he wanted to go to the Olive Garden. He LOVES it there. He had to check out his hair in the mirror on the wall. He is so funny:)I love it when he needs to wear a suit to church or the hockey games. He looks so handsome. At least to me. And all the girls who stare and titter and giggle with each other. His brothers love to point out to him how the girls all seem to really like him. 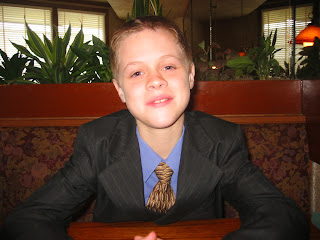 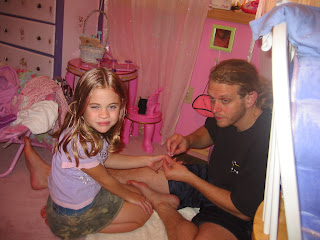 Stud put shiney pink highlights in Princess' hair yesterday and painted her nails. She LOVED IT! Sure looks like they have been drinking or into some kinda drugs, eh??


It is Tuesday night now, not sure when it will say this posted. Princess and Jock went to a pottery place yesterday and got to use the wheel and everything. Jock LOVED IT! Clown is waiting for me to play Mastermind with him, so I need to skidaddle.


At some point soon I will sort through people's comments and post them...I hope!
Posted by Lowa at 2:53 PM 2 comments:

So I took the younger two kids to the dentist this morning while the older two were in their weekly Science Class.

Princes has THREE CAVITIES!?!? ACK! I am mortified! Cryptic and Jock have each had maybe two...actually I don't think Cryptic has had any. Anyway, Clown had two when he was Princess' age and I was shocked then. Now to find out that Princess has THREE!? *sigh* I guess we are getting more lazy with each kid and I know we don't supervise like we should. We need to floss more too.

So anyway, they called me back to show me something concerning them with Clown. He was laying there with the head phones on, watching a movie on the screen in the ceiling above his head. He looked so cute, holding the suction thing in his mouth. I forget names of teeth, but it is one of the two front top ones that they showed me. I was not surprised and wondered before I took him if they can do anything about it. It came in all strange and it bothers him that it is quite far behind the other one. So the dentist showed it to me and it is actually bad enough that we need to take him to the orthodontist that Cryptic and Jock see. Neither of them have braces yet, he is watching and keeping an eye on things. Clown will need something put on for a few months, to get this tooth to move forward more and be where it is supposed to. So I went back out to the waiting room and called my friend who was watching the older two boys and making sure they were behaving in the class. She said they were fine.

They call me in AGAIN after they do the panoramic x-ray of Clown's mouth for me to take to the Ortho when I get an appointment. The dentist shows me something that concerns him. Clown was born without one of his permanent front teeth! I forget the one, I think it is an incisor. On one side, we can see where the permanent one will come down and on the other side...NOTHING! So when he is old enough, he will need an implant put in there. *sigh* It never ends with these kids!

In other news, the kids LOVE their Monday morning classes. Clown especially. I was most concerned about him, since he is SO introverted and was so upset at me forcing him into this class. He actually raised his hand and answered a question TWO TIMES and LOVES the teacher. He was not able to sit beside his sister, but I did catch him talking to a few new kids he doesn't know. So all is well there.

Cryptic is adjusting to High School. He thought it was too easy at first and was convinced that he only had two classes. When he logs onto his lap top every day, the assignments are listed. He was saying he only had assignments in two classes. I thougth that odd and pointed out that perhaps he should contact his mentor or any of the teachers. He assured me all was well. He came to me the other day and sheepishly said that indeed I was right. He got some e-mails from concerned teachers of the other three classes who were wondering why he was not doing his assignments! Apparently, he had to go to another site or place or something to access those classes! He spent the past few days catching up and after doing a lab tomorrow in his Physical Science class, he will be all caught up! *whew*

Jock made the PeeWee AA hockey team!!! Stud and I told him we knew he would make it and even if he did not, we didn't care. We placed no pressure on him and left the decision up to him as to whether he wanted to even try out or not. He opted to try. He had gone for four or five try outs and last night they made the final cut. It is hard to tell outwardly when he is nervous, the only way I know is if he comes right out and tells me. OR if he snaps at anyone even more than usual. That is the clue that he has himself worked up. He told me he was nervous, but I couldn't tell at all. When I saw them all coming back up from down in the room the head coach called them into, I went to talk to Jock. I walked past a friend of his who I knew tried out for one of the goalies. There were three goalies left and I knew they were cutting only one last night. So I walked past "P" and said, "UH??" He knew what that meant and grinned and gave me the thumbs up sign. I was about to ask him if Jock made it or not, but then decided I wanted Jock to tell me himself.

I was watching a friend's little girl who is Princess' age. They also have three boys older and also home school. Her Dad was there, but she wanted to hang around with me so I let her. When she and I went to ask Jock, I wasn't even thinking! Her brother was trying out for goalie. So when Jock said yes, he made it and he did his grin at me, I was so excited and happy for him! Then G (Little girl) piped up, "Did J (her brother) make it??" Jock and some other boys he was with laughed and said, "No!" Then I think Jock realised how mean and rude that was. This was J's little sister. She took off running to tell her Dad. By the time I caught up with her, her Dad already knew. J himself did not even get to tell him! I felt SO BAD, but Stud says I shouldn't, it wasn't my fault. I also feel bad that Jock was so rude about J being the last goalie cut. He has never liked J for some reason. They used to take swimming lessons together. Seems not many of the boys like the poor child. I guess he always brags or something and is actually not nearly as good as he thinks he is. I told Jock that since J made it that far and was the last goalie cut, that is saying something. He just shrugged.

Anyway, Princess is in the tub and Jock has a friend over to spend the night. We brought him back with us from Science class this morning. I had better sign off for now!
Posted by Lowa at 6:56 PM No comments: