The weather has been very sunny for over a month with very little rain. The past few days it got overcast and was cooler, which was very good news to Cryptic and myself. We are not fans of brightness and heat!

As I sit and type this, my two eldest babies are on their own in a movie Theatre! For the FIRST TIME. EVER. I am so so SO excited for them:)


Stud and I have been going to take them to see "The Dark Knight" and have been trying to figure out who to pawn the younger off on so that we can take the older two. The older two are our awesome babysitters and if Stud and I want to go out, we just pay Cryptic and Jock to watch the younger two. A week or so ago they each made $15 watching them for a few hours while Stud and I went out with friends. Mainly the six of us go out as a family, but some movies the little ones just can't see.

So as I was doing some school with the younger two this afternoon, Jock came to me and said "Why don't Cryptic and I just go see the movie ourselves??" DUH! I can't believe I did not think of it:) So I dropped them off and Stud will get them when they call. They had to pay for it themselves. As I was dropping them off, Cryptic checked with Jock to make sure he had enough cash for his ticket. I thought that was thoughtful. The difference between the two is cute. The whole excitement for Jock was that it would just be them. Cryptic wanted me to go with them! He and I are very close and share a lot. We read the same books, watch the same movies, listen to similar music. So he likes to share it all with me and doesn't mind his ole Mum along. Jock is really trying to get some distance, which I can totally respect. Stud told me not to stay and that he will take me to see it later. Clown and Princess were fussing and not wanting me to stay at the Theatre either. They wanted me home. I feel very loved:) Everyone wanted me with them except Jock and I can totally understand where he is coming from, so I still feel loved:)

I hope they make a habit of this. They really need to get out more! I know Cryptic is looking forward to turning 16 in November so he can finally get a job:)

Princess, Clown and I did some fun history today and we played math Bingo and did history and a lot of grammar yesterday. I am getting some really great books from Amazon and we are going to really do some fun activities this next school year! I will post photos here and there. We are going to do cave drawings tomorrow and within a few weeks we are going to make a pyramid out of home-made blocks we will make from sand/glue.

Princess has a cute Faerie Recipe book. I need to get off of here and help her make Faerie Hats and Faerie Punch. That is the main reason she didn't want me to stay out with her brothers:) Hope the photos turn out!

Well, I guess it is about time to post something. Just haven't felt like it recently. Don't read as many blogs any more either. I have about 49 faves and cannot keep up!

The main news is that Princess is FINALLY riding a two wheeler. She just has never had any interest. She got a bike about...let me look back and see...WOW! I TOLD STUD it was a long time ago. Yikes! LOL She has had this bike for almost five years! I told him yesterday it was too small. She got it the Christmas she had just turned THREE. 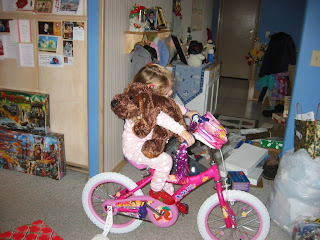 She never really cared much about it and would ride on it a few times a summer and maybe here or there in the spring or fall. I bet she spent a total of two hours on the thing the whole time she has had it.

So the other night Stud, Clown and I were going to go for a biek ride and Princess wanted to roller blade. We said no, she needed to ride her bike. She said she was too big to ride with training wheels. We reminded her that she has not yet learned to ride a "two wheeler" and we will work with her. For now, we need to keep the training wheels on.

I forget what transpired, but I think just Stud and Clown went or something. So a few nights later (or maybe the next night) I hear them all saying that Princess is riding with no training wheels! I go out and sure enough, she is doing it. It is hard for her, since the bike is too small and her legs are so long. 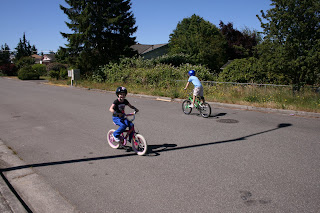 Clown is very glad to have a sibling to ride with now! Jock sold his bike last summer and Cryptic has never learned to ride. I thought perhaps Princess would be following in his foot steps.

I wish I had photos of Jock learning. It was a few months after his fourth birthday. He asked Stud to take off the training wheels, Stud did and Jock took off down the driveway! It was incredible! He never slipped or tipped over or even wobbled. Clown was the EXACT SAME. They were the same age and everything. Jock had turned four in June and that October is when he took off. Clown was four in May of 2003 and that September, off he went!

Nope...can't find one. Will have to see if Stud has any. He does the photos all funny and I can't ever find half of them!

So Princess is kind of wobbly and not as steady as her brothers were when they started, but still. She has a great time and has only scraped up her leg once. Cyrptic was fine and totally took off on his when he was eight or nine, but freaked out when he realized that I had let go and he had gone on his own for about 20 yards. He felt so betrayed that I had not warned him (I knew not to or he would stop and not try!) and was SO upset at me, he has refused to try since:( He honestly doesn't care, so we have left it. If he wanted to do it badly enough, he would have kept at it, right?? Princess is very determined and tries and tries. She has spent hours out there now.

So that is the main news around here. Princess wants me to do something with her. Cryptic is playing video games, Stud is playing his weekly Sunday night hockey game and Jock took Clown up to the local school playground for some "brother time". Since he has turned 13, he loves to take one of his younger sibs each at a time and go for bike rides (he uses my bike) or walks and various things.

Hope things are going well with everyone!
Posted by Lowa at 7:18 PM 7 comments: