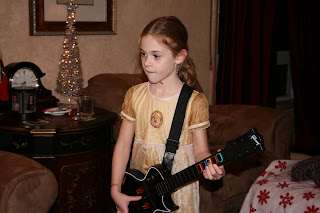 How cute is this?? Princess trying to play her Dad's "Guitar Hero III" that he just received for Christmas. You can tell she is struggling a little bit. 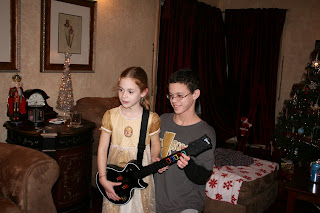 Enter Cryptic. He saw her struggling, so stepped in to help. How precious is this??

*NOTE* The odd mark on her neck is a tattoo of a rose that she got in her stocking.
Posted by Lowa at 10:03 PM 4 comments:

Yesterday we finally got the gingerbread house made and last minute shopping done.

Today was spent doing some last minute cleaning, finally getting my fudge made and going to our lovely Christmas Eve service at church. After our traditional supper at Olive Garden we came back here and exchanged gifts with some friends of our's. Then we set out Santa's snack, read the true Christmas story and then "T'was the Night before Christmas". The kids are still all hyped up and can't seem to settle down. *sigh* You gotta love it!!

I know you all want to see photos of these goings on... 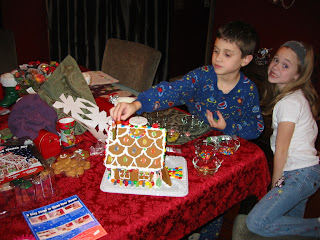 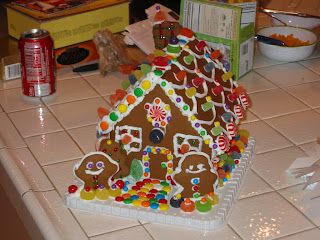 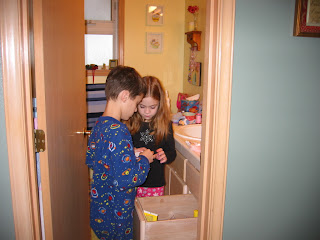 Clown and Princess work together to organise a drawer in one of the bathrooms. 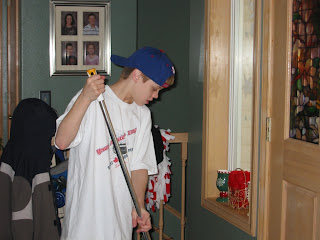 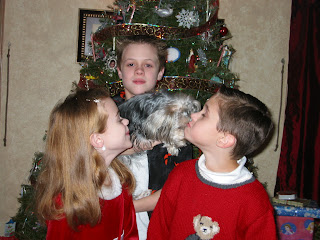 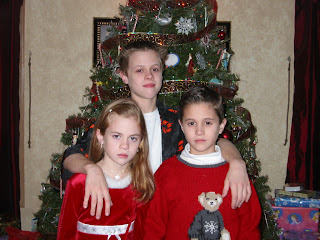 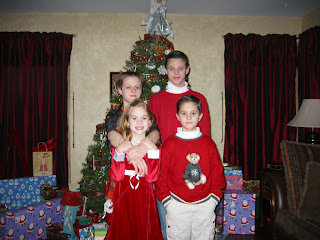 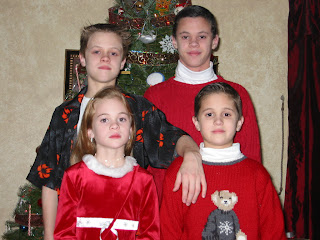 As you can see by a few shots, Princess is quite grouchy and seems to be behind on her sleep. As I finish this post, Clown has laid a sleeping bag on the floor of Jock's bedroom and seems to be camping out in there. Princess had hoped to sleep in her new horsey sleeping bag that she opened today from her Poppa in SC. She wanted to sleep in Cryptic and Clown's bedroom but then Clown decided to be with Jock. So Cryptic, sweetheart that he is, told Princess to get her sleeping bag ready in the Rec Room and he would put in a Christmas movie out there and they can fall asleep watching that.

Have a wonderful holiday with plenty of good food and good times with loved ones!
Posted by Lowa at 10:23 PM 2 comments: 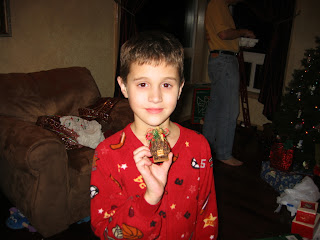 Well...here I sit with a belly full of my Favourite Thai food. I just mentioned to Stud that I would like some and away he went! Ordered it, picked it up and brought it home! I am SO SPOILED! I am taking advantage of all the fattening yummy foods that I can. Starting January first, I am going to take this eating healthy thing and getting some exercise very seriously. This is ridiculous! I am far too young to be in the pathetic physical shape that I am.

That is why when I get off here, I will eat some cookies. Christmas cookies. Am I hungry?? Of course not! I have a gut full of Thai. But they are there. They smell good, they look amazing and they call to me. You know. Logical, right??

I will share with you all some recent photos of the goings on here at our house. 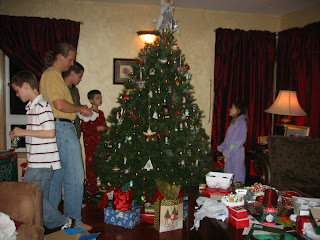 Princess wanted an ornament up high and was very pleased when Jock offered to lift her up and help her reach! Was pretty funny. He used to carry her all around when she was a cute little baby and toddler but it has been a few years I am sure since such an act of affection and charity hit him in regards to his sister. He gasped and huffed out to her,as the veins popped out of his neck and face, "Hurry Princess! Hook it on somewhere! You are heavier than you look!" 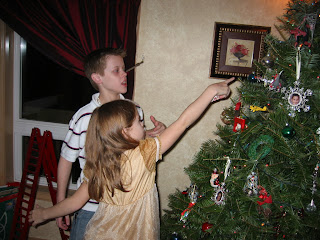 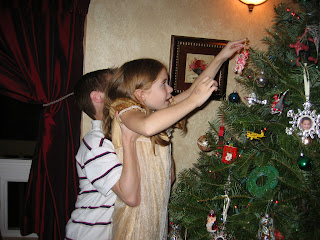 In other news, Princess' holiday dance recital was last Saturday and she had fun as always. The only issue we had was that her teacher was stuck in traffic, so was not available in the wings to give pointers. Princess and her fellow ballerinas has to go completely by memory. Imagine, remembering something you have been practising weekly for over three months! LOL I am kidding, they really did awesome for being seven years old. It was quite cute. One of them would kind of start to do some things and the others would watch and then follow along and then they would soon kind of stand there looking worried. Then another would do something else, and the others would pick up on it. It is not clear who was ever doing any of it correctly, but it was fun to see them try! I will see if Stud can put a small part of it in video form to post on here soon. It is really cute!


We are glad she got that done when she did, because by Tuesday she was ill. Quite ill and still is. She was determined to attend hockey this morning and did just fine. We think she is on the mend! The bad part is that Stud had gotten she and I some very good tickets to the Pacific Northwest Ballet's verson of "The Nutcracker" for yesterday afternoon in Seattle. We were going to all go downtown and make a day of it. See the sights and lights and holiday decorations. They would drop she and I at the ballet and then pick us up again.

Stud woke me yesterday morning at 5:45 on his way out the door with Jock to play "Stick and Puck" to tell me that Princess had just barfed AGAIN. My heart sank. There was NO WAY that she could come. She had been planning for weeks just which dress she would wear, asking me about it and just gushing about how amazing it would be. She was just heartbroken yesterday when Cryptic and I left to go. He was the only brother I could convince to go. I think Clown would have enjoyed it more, but getting that child out of the house proves quite a task. He is even more introverted than I am! I am sure he would have at least stayed awake for the performance though. Cryptic slept through much of it. *sigh* TEENAGERS! I only wanted to go because I knew it would be very special for Princess. It is not my cup of tea at all, but I muddled through:) 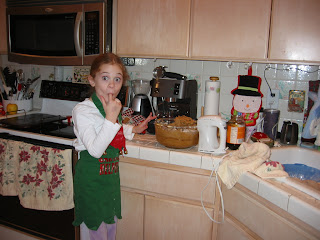 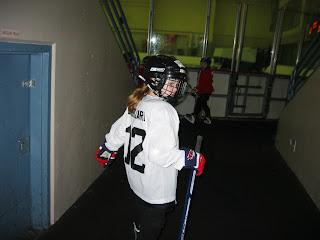 So have a peek at Stud's blog to take a gander at something exciting that happened at the rink today. We took Princess for her hockey practise and lo and behold. Some nice young man was there signing jerseys, sticks, etc. What a great kid! He is the same age as my nephew and was born the year before I graduated from High School. Man, I feel OLD! 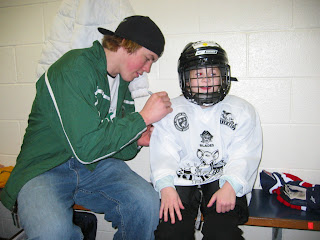 What else has been going on...? As you can see by one of the photos, Princess is back with Mr. Charlie. She gets to go to private lessons every few weeks and she is DELIGHTED! 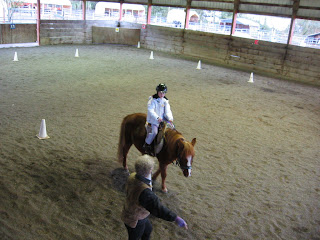 It appears that some of the family members have requested that I play some card games with them and then watch a movie.

I hope to post a bit before Chrismas Day. If not, I hope that all of you have an incredible holiday and best to you all in the New Year!
Posted by Lowa at 7:56 PM 2 comments:

Wow, as I went to get on here, it says I have 64 comments that need to be "moderated". I KNEW I was behind! LOL

So yeah, Stud and I had a great time on Kaua'i. I will tell a bit more about it soon, I promised Princess that I would have a tea party with her and watch Frosty the Snowman. I need to bake and clean Stud and I's room too. I want to rearrange Princess' room so her bed is not against the wall. That will be a few hours' undertaking, so who knows if I will get to it today. I was going to do these things earlier, but then remembered that the HSing group was going to meet at a Bouncy place that the kids LOVE and we have not been in a long time. So I took them to that and then out for lunch at the Golden Arches. There is a lot more to do also, so I better get to it!!

Before I do all that I wanted to just post a few shots from the holiday. 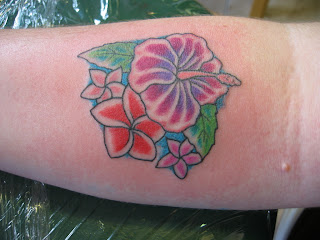 If you want to see Stud's, you can go to his lame blog

Here is one of Stud snorkeling ~ 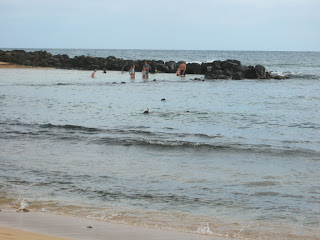 The view from our patio (or should I say, "Lanai") was GORGEOUS! 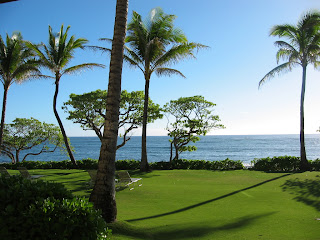