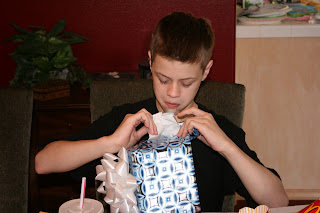 Just thought I needed to update this.

What to talk about?? Hmmmm...well Cryptic is reading a book to Clown right now. Jock is watching a movie upstairs while Princess tries to sleep nearby in the Rec Room. I am sure it is hard with me here typing and clicking away on the keyboard. Stud is playing his weekly Friday night hockey game.

We went to a BBQ at friends' tonight. They have been in the Home Schooling support group that we are in and we have been meaning to get together. We finally did! He is from Saskatoon, the same as me and she is from Calgary. Pretty cool to have some fellow Canucks in the group. So that was nice. They have two adorable little girls, ages 6 and 3. Her hubby works at Microsoft so he and Stud had a good time "talking shop" while she and I enjoyed looking through some scrapbooks she has made. She also set up "Dance Dance Revolution" and showed the kids how to do that. Jock had a good time and it appears Stud is a natural!


Tomorrow Princess is having two friends stay overnight. We have implemented a fun little thing lately. Every Monday morning, we choose names of family members. Whoevers name you get (My grammar is horrid, what is the correct way to word that??), you do kind things for them all week. You do some of their chores without them knowing, leave them treats and coupons throughout the house for them to find. On Friday night at supper, we reveal who had who (whom??) and whoever is right, gets rewarded. Whoever is right five weeks in a row, gets a special prize. I am winning! So far, I am the only one to get mine right every time:)

Anyway, someone left Princess this coupon that said she could have two friends over. So she is using it tomorrow night. Clown got one that said he can take a friend to a movie, so I am taking he and his friend A to see this tomorrow. I took Cryptic and Princess this morning, while Jock stayed with Clown. It was his first time babysitting and he did a great job. Got him food, played with him and did not pick on him or argue, so that was awesome!

Princess was just in her room for three days. She LIED TO ME on Monday night. She was grounded from playing her DS Lite for a week. She got it back on Monday. So she was playing for about an hour when I told her that she had five minutes to shut it off and get it back to me (I keep them in our room and only hand them out as a treat sometimes.) and I went to tuck Clown in bed. When I came out, I asked her where it was and she said she didn't know! When pressed, she opened up the piano bench and imagine my "surprise" that there it was! So she was in her room for two days as punishment for lying. She and I and Stud sat and talked it all over and she BEGGED to get a spanking. I am not sure she has ever had a spanking, but Jock has a few times. I told her I don't spank (I don't believe in hitting children, sorry to those of you who do!) and that is Daddy's department. My parents did not spank us, his parents did. So he knows about that area, I don't! LOL Anyway, she begged us to spank her instead, which we got a kick out of. After some discussion about what she should be spanked with, how many times, where on her body and would it change anything or teach her anything, it was agreed that banishment to her room was the proper thing to do.

She had another day added on for coming out of it often and talking to all of us over the course of the first two days! So she was glad to come out this morning and have freedom!


What else is going on?? Hmmmm...Ah yes! Jock turned 13 this past Sunday! Is it just me or is that WRONG!?!? I don't like this at all. I am happy for him, he is one of those people who cannot wait to grow up and thinks it is great. So he is tickled pink, of course. But me?? Not so much.

I will close with some photos of him with his new "toy". I believe he blogged about it. I am shocked he did not post some photos. We only took about 89! LOL The only wrapped gift he got was his cell phone back. We paid off the remainder of the bill and shall see how long he can keep it this time:) He was totally surprised and very happy! 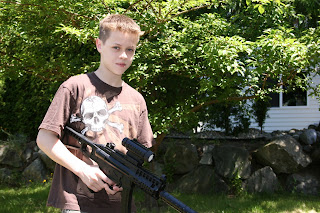 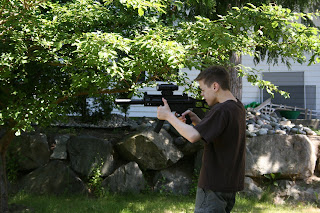 Ok, I am tired. Better kick Jock off the TV and get him to bed too:)

For some reason I find it amusing that Stud puts photos of our yard and flowers on his blog and I, the woman, do not.

I love flowers. LOVE THEM! I try to plant them and grow them and all that. I love to look at them and smell them (most of them) and get them as gifts and have them all over the house in vases. I love outdoors. I love the view of the ocean and sunsets we get from our house. I love to look at photos of the same things on the blogs I frequent.

Yet for some reason, I don't post any of the photos. I don't even take them. Stud does.

So if you want to see some of our pretty flowers, mosey on over to Stud's place. I suppose I may as well call him by his true name on here, since the dork broadcasts it all over the blogosphere! *sigh*
Posted by Lowa at 12:35 PM 2 comments:

Princess got a hair cut! 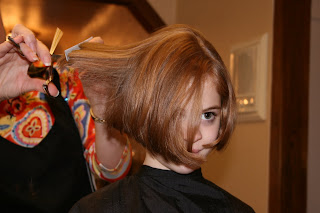 Last week Princess got nine inches of her gorgeous locks cut off. She has very thick hair like me, but it is tidier and smoother. Like mine USED to be when I was younger. I told her that I will pray that her hair does not go bonkers like mine did:)

I especially adore the back and how it goes up that way:) Her hair is PERFECT for this cut and she and I are both just thrilled! 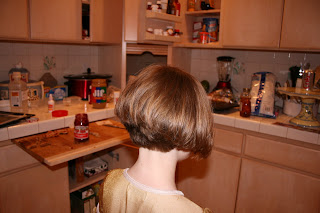 Have not really felt like blogging or reading blogs lately...not sure why. May be more regular again at some point, but I am really trying to get a schedule going with the kids and get more "seat work" done with the school. Weather is improving and I want to get them out to the parks with their friends more, and just do more outdoor family things. Summer is NOT my favourite, but the kids love it so I want to make it special for them.

Hope that everyone is doing great!
Posted by Lowa at 10:05 PM 3 comments:

Just thought I would toss a quick post out here before I go to bed and read. Cryptic and I are reading these books and I am on the third one.I am half way through and really want to get in bed and find out what happens.

We took the flannel sheets off most of the beds and were thinking of taking off the electric blankets. No...we are NOT wimps, it is just lovely to climb into a nice toasty bed, is it not?? I turn mine on high for about 15 minutes before I get into bed and then shut it off. Ahhhh...bliss. Anyway, I am glad Stud said to wait to take those off because MAN! It is chilly:( I even had to turn the heat back on. I thought it was June now...???

Before I climb into my cozy bed and read my book, I wanted to share some photos and explain why I am frustrated.

I can't find anything for Princess to eat! Poor child is getting bored with the same stuff over and over. I have got to get cooking and perusing the recipe books I have out of the library. Yesterday I made some cookies for she and Clown to share, but they hate them:( Jock and Stud don't mind them, so at least they won't go to waste. They taste great for a few seconds and then suddenly it is like one is standing in a barn. They "taste" like manure. YOu know how sometimes you can taste something that you have never (and WOULD NEVER) eat?? Well, they taste like manure smells. Not really strong, but faint. The bite I took made me home sick for my childhood on the 80 acres I grew up on, but not enough to EAT IT!?!?

Eating out is clearly problematic...no one knows if they have soy in anything?? AND I forgot to have her epipen with me tonight when Stud took she, Clown and I out for Mexican after his hockey game (they lost) so I was really nervous with her ordering the food she ordered, not knowing for sure what was in it. Stud made the point that she has never had any anaphylactic trouble or anything, but still. The allergist prescribed the epipen for a reason, ya know?? Her testing obviously concerned him.

Here is a photo of her chopping carrots and celery to put in some Quinoa pilaf that I made the other night. Jock is typically the least picky person in our family, but he is the ONLY one who didn't like it! I love how she has her roller blades and helmet on:) Oh, that's right...my computer is totally messed up and I can't posy photos or watch any videos that any of you have on your blogs. I need to get Stud to fix it!

I was also going to show a photo of Clown, Cryptic and Princess playing the Wii yesterday and a craft I am attempting to make. I wanted advice on what to change and how to improve a centre piece that I am making with silk flowers...I have not done anything crafty in years and am attempting to see if I have any talent left at all! LOL

Well, those will have to wait. I just have to share how appropriate the name "Clown" on here is for my third son:)

Princess had a friend over this weekend. Last night as the three of them were playing, the friend giggled at something Clown did and said, "*insert Clown's true name here*, you could be a Clown when you grow up!"